No longer is the usage of lasers and optical solutions limited to visible laser pointers and traditional communications applications. Optical solutions have expanded into a variety of fields, from guiding a new generation of autonomous vehicles (LiDAR) and enabling facial recognition for smartphones to identifying greenhouse gasses and detecting cancer in the medical field.

Many of these applications require precise analysis of the optical light spectrum displayed (or not displayed) on the test instrument. The analysis techniques behind understanding spectral behaviors is a science in itself; what is not shown on an instrument can be as misleading to your results as what is shown, and vice versa!

Join us in this webinar where our experts discuss:

Michael has a Bachelor of Science degree in Mechanical Engineering with a minor in electronics. He has over 25 years of industry experience in various fields including Medical, Aerospace, Automotive, and data acquisition. He also has over 20 years of experience specifically in the field of optical analysis and testing.

Register for the Webinar HERE

Anritsu’s Hiroshi Goto to participate in Panel—The Case of the Closing Eyes: PAM is the Answer, or Not?

Join this panel of experts for a lively discussion on the state of testing practices for high-speed networking technologies. This year's panel will be evaluating the pros and cons of characterization efforts for 400GbE over PAM4. Chip experts will discuss design verification challenges while the test & measurement industry veterans will provide direction on testing implementation plans. Come prepared to engage in the discussion!

Anritsu will showcase its leading test solutions and techniques to verify high-speed communications featuring the latest technologies, including PCI Express® (PCIe®) 3.0/4.0/5.0 and Ethernet PAM4, during DesignCon 2020 in booth #837. Test solution demonstrations will include:

Attend Anritsu's technical sessions and register for a chance to win an Echo Show & Ring!

GSG-8 is the newest positioning, navigation, and timing test solution offered through Orolia’s GSG family of simulators. It was developed to deliver the highest standard of Global Navigation Satellite System (GNSS) signal testing and sensor simulation performance in an easy to use, upgradable and scalable platform.

GSG-8 features high-end performance with a 1000 Hz simulation iteration rate, high dynamics, real-time synchronization, and simulation of all-in-view satellite signals. Advanced GNSS jamming and spoofing options allow the creation of benign and threat scenarios required to meet the needs of mission-critical applications. GSG- 8 is ideal for any development or integration project that requires sophisticated simulation capabilities in any simulated environment from any point on earth, and beyond.

GSG-8 supports multi-constellation, multi-frequency GNSS simulation and advanced threat scenarios, including jamming, spoofing and repeater simulation. Powered by our industry-leading Skydel simulation engine, GSG-8 can be programmed to simulate operations with all current and future GNSS signals. The ability to simulate multiple synchronized trajectories through multiple instances of the Skydel simulation engine allows testing of complex GNSS systems, such as:

GSG-8 can also incorporate encrypted or proprietary signals with a comprehensive SDK, which allows signal generation of even the most sensitive signals.

GSG-8 is revolutionizing the GNSS simulation industry with its easy to use, advanced simulation capabilities, extraordinary flexibility and rapid development cycles. With a robust and innovative 1000Hz software engine and commercial-off-the-shelf (COTS) software-defined radios (SDRs), GSG-8 easily outperforms the competition. It can accommodate unlimited configurations to conduct system testing and simulation, and its SDR format makes maintenance and customization much easier and more affordable than other options. Trust GSG-8 to deliver precise results for your critical programs. Orolia can help ensure reliable performance and accelerate your system’s time to market or deployment.

The unique and modern architecture of its Skydel simulation engine provides an extensive application program interface (API) to configure and control all aspects of the simulator. The API is available in various programming languages such as Python, C#, C++ and LabVIEW. Moreover, all human and machine interactions with the simulator can be recorded and exported as executable python script, which greatly simplifies the work of test engineers who want to automate or expand the simulator capabilities. 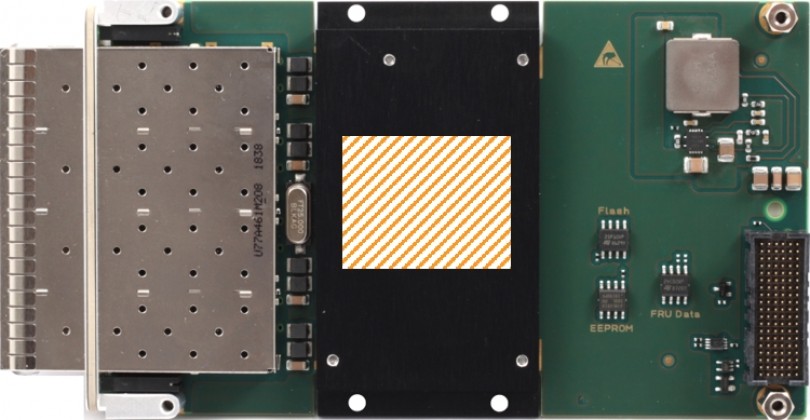 The XMC477RC is a quad switched mezzanine card (XMC) compatible module providing a 4-channel Gigabit Ethernet Small Form Factor pluggable (SFP) interface. The new XMC is distinguished by its support for four SFP modules for maximum flexibility, allowing customers to choose between 1000Base-X optical or 1000Base-T copper connectivity. When paired with an Abaco single board computer, the XMC477RC delivers a high degree of functional density that can reduce the number of cards in a chassis – eliminating, for example, the requirement for a dedicated Ethernet switch – that can help minimize the size, weight and power (SWaP) of a subsystem.

The XMC477RC provides a simple and highly cost-effective form-, fit- and function compatible upgrade for existing users of the PMC676RC or the PMC677RC who will benefit from a more configurable product with higher throughput.

Fully rugged, with an operating temperature of -40°C to +85°C, the XMC477RC is designed for naval/marine-, land- and air platforms within defense and aerospace markets including fire control systems, airborne mission computers, radar systems and flight control. It supports a high speed link to the host via an x4 PCIe™ connection, allowing all front I/O ports to run at full line rate.

The VP460 is designed to enable customers to begin development of their next generation systems using revolutionary new processor technology. It is in alignment with the SOSA™ Technical Standard to provide the interoperability required by the US Air Force, Army and Navy.

The VP460 is a major step forward in performance and density, enabling the use of fewer boards with increased performance – thus minimizing SWaP - as well as the built-in ability to handle advanced MIMO, beamforming, and many applications such as communications, sensor processing, radar, and electronic warfare.

RFSoC and HBM, All in One

The HBM VU37P device features the speed and capabilities of an UltraScale+ FPGA together with integrated DRAM in the FPGA package, capable of up to 460GB/s data transfer rates on-chip.

Teledyne SP Devices today announced the release of ADQ7WB – a wideband digitizer with an analog input bandwidth of 6.5 GHz. This new product is a significant addition to the company’s solutions for the RF market segment and is launched in response to high customer demand. The performance and features of ADQ7WB make it ideal for demanding radio applications.

In addition to the on-board real-time processing the ADQ7WB supports data streaming at very high rates. This allows for post-processing in either a host PC or via peer-to-peer streaming to a graphics processing unit (GPU).

ADQ7WB is available in modular PCI Express (PCIe) and PXI Express (PXIe) form factors and offers flexible and simple integration that can easily be scaled to include additional measurement channels. It also supports highly accurate trigger and synchronization capabilities that enable implementation of multi-channel systems.

For more information on the Asterion line of AC power sources download our datasheet or request a quote.

Abaco Systems announced the GBX25 Layer 3 Managed 6U VME NETernity Ethernet Switch. It provides unprecedented flexibility, delivering new levels of simplicity in configuring 6U VME network support and handling almost any network configuration while delivering industry-leading performance. The GBX25 represents the optimum switch solution for any user planning to create new systems based on the 6U VME architecture, or planning to refresh existing systems.

Typical applications for the GBX25 include mission computing; fire control; radar; sensor/video aggregation and networking; and radar. It is also appropriate for industrial and automation applications.

A single flexible platform, the GBX25 allows virtually all 6U VME Ethernet switch solutions to be architected with a single product, whether front or rear (or both) I/O, copper or fiber, 1G or 10G. Up to four 10G SFP+ modules brings the ability to aggregate multiple 1G channels together. The 10G functionality makes it possible to use the switch as an aggregator of multiple video/sensor data streams to be sent via one or more 10G uplinks to other systems such as data servers or mission computers.

The use of SFP modules also brings the ability for customers to configure the GBX25 to fit their application precisely, and not be constrained by fixed configurations. Having a common platform  allows for engineers to use the GBX25 in multiple systems  without the need to relearn the capabilities of the product or how to configure the management software.

The dual I/O variant will offer up to 40 switched ports (24 rear VME ports and 16 front panel ports), potentially allowing for a single switch to replace two others that would need to be configured independently in existing systems. It can also make an important contribution to minimizing slot usage in a system, reducing its SWaP (size, weight and power) profile.

“While other companies are allowing their 6U VME offering to decline in competitiveness, Abaco remains committed to ensuring that users of VME systems continue to have access to the latest cutting edge switch fabric technologies, providing not only high performance but also longevity,” said Peter Thompson, Vice President, Product Management at Abaco Systems. “It is also further evidence of our commitment to our customers that we will help them minimize their long term cost of ownership.”

“The GBX25 offers increased capability in port density and data rates; lower power consumption than previous products; and the ability to guarantee the highest levels of security through the use of the latest release of OpenWare,” continued Thompson. “It is a further demonstration of our belief in the long term viability of the VME architecture.”

The maximum non-blocking switching bandwidth of 340Gbps in the highest density version of the product provides more than sufficient headroom for even the most demanding applications.

OpenWare was developed by Abaco’s Networking Innovation Center, and has been adapted on numerous occasions to deliver the functionality required by specific applications. It benefits from over 20 years of continuous development, and is field-proven in thousands of mission-critical installations around the world - even in space. Multi-level military-grade security delivers the optimum application-dependent balance between protecting data and preventing unauthorized access on the one hand and accessibility and usability on the other. 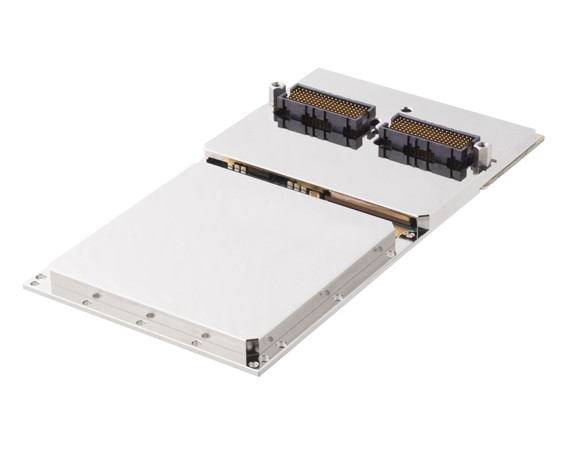 The Abaco NVP2102 is a chip-down 3U XMC graphics output and video capture board based on the NVIDIA® Pascal ™ (GP107) Quadro® P2000 GPU. The NVP2102 leverages the high performance of the GPU with its 768 CUDA cores and 4GBytes of GDDR5 memory to deliver 2.3 TeraFLOPs of peak performance with CUDA™ and OpenCL™ support.

Developed for deployment in the harsh and cramped conditions typical of battlefield platforms, the NVP2102 provides an optimum choice for all forms of graphics/video processing input/output. Typical applications include situational awareness, signals intelligence, ISR and radar, while the Pascal GPU's high degree of parallelism also makes it an optimum for the GPGPU applications including machine learning and autonomy.

AXIS ImageFlex is an image processing and visualization toolkit enabling the rapid development of high performance image processing, visualization and autonomy applications aimed at size, weight and power (SWaP) sensitive platforms. It is focused on high performance GPU processing and graphics with interoperability with other programming paradigms such as OpenGL, OpenCL , CUDA and OpenCV.